Liliane Lamberty-Atallah: A veteran of displacements and reinventions

Posted on 25 November 2015 by Michael Chidiac 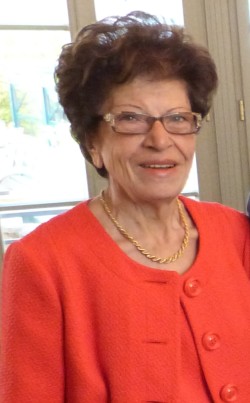 Liliane Lamberty-Atallah, Honorary President of the Cercle Libanais de Luxembourg, and Head of the Lebanese Stand at the Bazar International de Luxembourg, is a veteran of displacements and reinventions, sometimes due to circumstances beyond her control, and sometimes by choice.

Throughout, she has maintained her strong sense of connection to her Lebanese family and the wider Lebanese community.

Liliane was born in Alexandria, Egypt, the daughter of Lebanese parents who themselves had been born in Egypt. Her grandparents had left Jezzine in South Lebanon during the reign of the Ottomans. She spent the first seventeen years of her life in Alexandria, receiving a good education and being nurtured by a close family who, despite their gratitude for the refuge of Egypt, retained a strong sense of their Lebanese identity.

However, the safe haven of Egypt became less safe during Nasser's rule. In 1962, Liliane and her family landed in Beirut. The seventeen-year old girl fell in love with her homeland at first sight. She started her first job in Beirut, working for a British bank, and lived happily there with her family until 1973.

As an excellent shorthand typist, Liliane was then recruited by the World Bank and at 28 spent a wonderful year in Washington D.C., mixing with a multicultural panoply of fellow employees. It was an exciting time of new experiences, hopes and dreams. A steadying thread throughout, though, was the correspondence relationship she maintained with her Luxembourgish penpal, Jean-Claude Lamberty, whom she had never met in person.

More than a friend

She smiles to remember, “It was like a fairy tale...He travelled to Washington D.C. to surprise me. We got engaged there and, when my year was up, had a civil marriage in Luxembourg. However, for me, it wasn't done until we had a church wedding, and that had to be in Lebanon, with my family.” M. Lamberty had always been reluctant to visit Lebanon due to the disturbances there, but this was a quieter period and, as Liliane reports it, “... he really had no choice. If he wanted me, he had to demonstrate it to me and my family in my own country!”

So they had a wonderful church wedding and a lovely reception the same day, in Beirut. All was as it should have been... until the Civil War began... that very evening! The family all felt that they must move again. For Liliane and Jean-Claude, Luxembourg was the obvious choice.

To coffee or not to coffee?

A few weeks later, the move was a fait accompli. Liliane was now no stranger to different contexts and cultures, so was ready to welcome this new phase of her life in her fourth country. Highly qualified and experienced, and with the World Bank on her CV, she expected to find a job quickly. However, reality differed from her expectations. As a married woman, she received a residence permit, but could not immediately obtain Luxembourgish nationality. No banks would take on a worker with no European passport. This setback had emotional as well as practical consequences.

Liliane was unprepared for the experience of being marooned in an unfamiliar, Luxembourgish, northern European culture, without family, friends or occupation. She found that the easy intimacy of neighbours that had been normal in Lebanon and Egypt was simply not understood. When she invited her neighbour to come over any time for coffee, she really expected her to come. “I waited, and waited. But no one came.” She felt hurt, alienated and lonely. She did not know or understand the expectations of formal invitations, appropriate notice periods and elaborate preparations for the simplest of social engagements.

After a year, Liliane received her passport, and was eligible to work. As her confidence strengthened, she persuaded her neighbours that the invitation to coffee was genuinely meant and that, at least as far as she was concerned, it was not necessary to prearrange every interaction. “I would be delighted to see them at any time,” she beams, “... and, eventually, they believed me!” And they came for coffee.

A new world in Europe

So, after two very difficult years, things began to improve. Liliane had also accepted a job offer in the European Community. She was thrilled to be able to work in Luxembourg, but especially that it was again in a multicultural environment. “I was very happy. The work was stimulating and varied. And there was so much to learn from all the different nationalities.”

Although she is modest and refuses to dwell on the exact nature of her contribution to the EC, it cannot be too much of a leap to conclude that the combination of her innate good humour, desire to connect, and amazing facility with languages made her an invaluable employee. (Liliane speaks seven languages: Arabic, her mother tongue, Italian which she picked up from conversations between her mom and a neighbour, English and French which she learned in school, German which she studied in Beirut, Spanish which she studied for three years in Luxembourg, and of course Luxemburgish.) It was a good fit and Liliane was so happy that she stayed with the EC until her retirement five years ago! 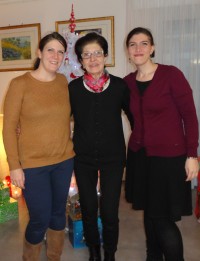 So Luxembourg turned out all right in the end. Liliane had a happy family life with a good man and two loving daughters, Magali and Muriel. She had a successful career with a respected employer and made many friends inside and outside of work. Despite her loneliness on Jean-Claude's passing two years ago, she is still well-connected with friends and family. Muriel has recently presented her with her first grandchild. But Liliane has never forgotten the difficulty and loneliness of her first two years in Luxembourg, and the related sense of connectedness to a different home – a Middle Eastern beauty of warm sun, heavy rains, friendly community and a passionate love of life, expressed in craft, music, and above all, the food for which Lebanon is famous around the world.

The war in Lebanon was long. Liliane's parents and siblings had all left for Switzerland or France, so there was no one to visit in Beirut. When the two girls came along, both parents felt that it was not safe to return with them. For sixteen years, the telephone was a lifeline, connecting the family with the comfort of Lebanese voices at home and around the world.

At last, in 1993, there was a quieter period. The occasion of a cousin's wedding drew all the family from Europe for a grand reunion in Beirut. It was wonderful... but also laced with sadness. Magali and Muriel were 15 and 10. They loved the adventure of exploring their roots and connecting with their cousins. But there was evidence of destruction everywhere. Bullet holes, broken roads, rubble. Liliane remembers the fear that gripped her when Magali, returning from a day at the beach with her cousins, said to her, “It must have been so lovely.... before...”. Liliane indeed remembered the loveliness which her daughter could only imagine, and feared that she would never want to return.

But she did. Being in Beirut again connected the whole family more deeply. Year after year, they all sought to maintain that connection, in whichever country they met.

This sense of connection powers Liliane's indefatigable commitment to the nurturing of the Lebanese community in Luxembourg. Ever since her own experience of feeling friendless and at a loss, she has reached out to other new arrivals from Lebanon. “At work, whenever I heard that there was a new employee from Lebanon, I would seek them out, make them feel welcome, and connect them with others who already knew the ropes.”

It was a natural step to organise informal gatherings outside of work... and over the years the community grew and grew. Eventually, it had developed sufficiently to form an official organisation, the Cercle Libanais de Luxembourg, in 2012. Although she was able then to transfer the organising burden to others, Liliane's inspiration and example continue to be honoured in her role as lifetime Honorary President of the organisation.

It also felt natural to seek representation and inclusion for the Lebanese community in the annual Bazar International of Luxembourg. This is no light responsibility. 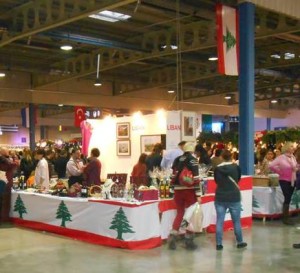 Liliane wants to encourage younger people to lend a helping hand during the Bazar weekend. She says, “By Sunday evening, we're all exhausted. But it's worth it. Everyone has a great time. And then the February meeting is the most exciting of the year! Then we learn the exact figures – how much was earned after costs, and the exact distribution to the charities. It's so good to see how all that hard work has paid off!”

The gift of community

But quantifying a contribution in monetary terms is only one way of looking at a life. The number of people, who have been welcomed, encouraged and helped, directly or indirectly, by Liliane Lamberty-Atallah's commitment to the Lebanese community in Luxembourg, in Lebanon and abroad, must surely be in the thousands. She feels deeply grateful to the community, but she herself has given so much to create it. A life well-lived indeed!

3 Responses to Liliane Lamberty-Atallah: A veteran of displacements and reinventions

This site uses Akismet to reduce spam. Learn how your comment data is processed.

This website uses cookies to improve your experience while you navigate through the website. Out of these, the cookies that are categorized as necessary are stored on your browser as they are essential for the working of basic functionalities of the website. We also use third-party cookies that help us analyze and understand how you use this website. These cookies will be stored in your browser only with your consent. You also have the option to opt-out of these cookies. But opting out of some of these cookies may affect your browsing experience.
Necessary Always Enabled
Necessary cookies are absolutely essential for the website to function properly. This category only includes cookies that ensures basic functionalities and security features of the website. These cookies do not store any personal information.
Non-necessary
Any cookies that may not be particularly necessary for the website to function and is used specifically to collect user personal data via analytics, ads, other embedded contents are termed as non-necessary cookies. It is mandatory to procure user consent prior to running these cookies on your website.
SAVE & ACCEPT
Loading Comments...